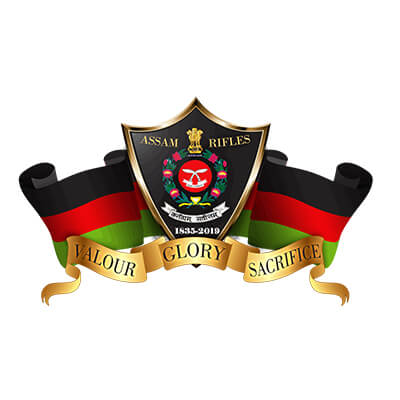 The Assam Rifles came into being in 1835, as a militia called the ‘Cachar Levy’. With approximately 750 men, this Force was formed to primarily protect British Tea estates and their settlements against tribal raids. Subsequently, all these Forces were reorganised and renamed as the ‘Frontier Force’ as their role was increased to conduct of punitive expeditions across the borders of Assam. This Force significantly contributed in opening the region to administration and commerce and over time they came to be known as the “right arm of the civil and left arm of the military”. In 1870, existing elements were merged into three Assam Military Police Battalions, named as Lushai Hills, Lakhimpur and Naga Hills. The ‘Darrang’ Battalion was raised just before the onset of World War–I. Since Reservists were difficult to be called on short notice and Gurkha Battalions’ soldiers were on leave in Nepal, the Assam Military Police were tasked to take their place. Thus, this Force sent over 3000 men as part of the British Army to Europe and the Middle East. In 1917, recognising theirwork during the Great War, fighting shoulder to shoulder with Rifle Regiments of the regular British Army, the name of the Force was changed to ‘Assam Rifles’.

The Post-Independence role of the Assam Rifles continued to evolve ranging from conventional combat role during Sino-India War 1962, operating in foreign land as part of the Indian Peace Keeping Force (IPKF) to Sri Lanka in 1987 (Op Pawan) to peacekeeping role in the North-Eastern areas of India in the face of growing tribal unrest and insurgency wherein the maintenance of law and order, countering insurgency and reassuring the people of the region became important tasks for the Assam Rifles.

Today the Force remains deployed in some of the most remote and under developed areas and provides security to locals. Assam Rifles has grown substantially over the years from 17 battalions in 1960 to 46 battalions at present. The Force also has a Training Centre and a number of Logistics Units. Through its long deployment in the tribal belt, the Assam Rifles has earned the complete confidence of the locals and has helped considerably in bringing the people of this region into the national main stream. The humane, just and ever helpful approach of the men of Assam Rifles has truly managed to win hearts and minds earning the Assam Rifles the sobriquet of ‘Friends of the North East’.